We Cannot Do It Alone 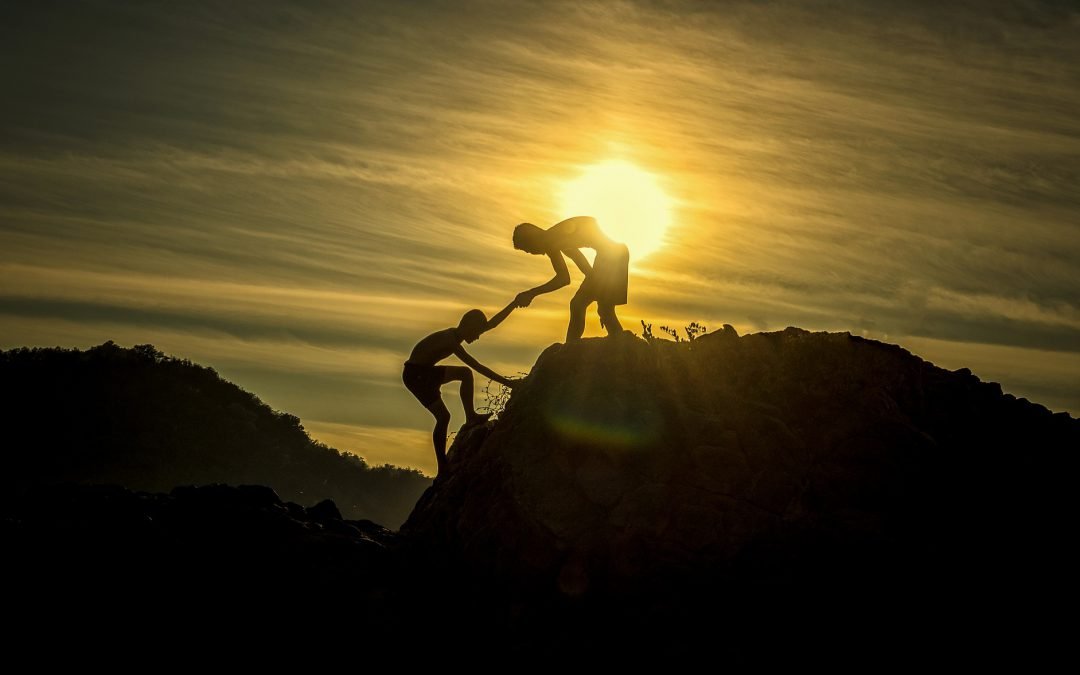 The situation here (verses 1-12) is that Jethro (also called Reuel), Moses’ father-in-law visited Moses after hearing all that God had done for the Israelite people. Note that Jethro was a Midianite priest. Moses told Jethro all that had transpired pertaining to the Exodus. Now let’s begin our lesson.

Exodus 18:13 (NKJV) And so it was, on the next day, that Moses sat to judge the people; and the people stood before Moses from morning until evening.

Moses began his daily duties as usual with Jethro present this time. He spent all day judging the people. We should remember that there were millions of Hebrew people at this time so Moses’ job was a strenuous one. All day long people came to Moses to settle disputes between them and to make a decision in basic legal matters. It should also be noted that the Hebrew people did not have any written laws to govern their affairs. Moses was considered to be the man of God and therefore could judge rightly.

Not only was Moses’ job a strenuous one; it was also very inefficient and promoted a backlog of work. It would be impossible for Moses, one man, to have stayed on top of all of the disputes that were present within the Hebrew community. This could also lead to other problems that arose when people had to wait too long to settle their disputes before Moses.

What are you doing that is very strenuous and that could be done more effectively and efficiently? Have you evaluated your present activities to determine the impact they all have on you and if there is any need for improvement? Are you aware of all of the activities and duties that you have? What about your church or community? Do you wear a multitude of hats for the sake of “someone’s got to do it?” If you don’t know the answer to these types of questions then perhaps you should take some time and evaluate your regular activities and determine how your time is spent and then determine the impact these activities have on you and your family.

Consider that the things that you are involved in will affect your family because that is time away from them. Of course, you can’t spend all of your time with your family and friends but there should be some quality time reserved for those purposes. The more time you spend doing a multitude of things away from your family, the more your family will suffer because of it and a lack of you.

So take inventory of your life and see what you are involved with. Sometimes we just don’t realize the many hats that we wear because we never stepped back to evaluate ourselves.

The Observation and Inquiry

Exodus 18:14-16 (NKJV) So when Moses’ father-in-law saw all that he did for the people, he said, “What is this thing that you are doing for the people? Why do you alone sit, and all the people stand before you from morning until evening?” And Moses said to his father-in-law, “Because the people come to me to inquire of God. When they have a difficulty, they come to me, and I judge between one and another; and I make known the statutes of God and His laws.”

Though Moses began to do business as usual, his father-in-law noticed what he was doing, namely too much. I believe that the response to uncertainty should be a question and not a statement. That means that you should always ask questions to assess a situation rather than making a multitude of assumptions based on what you see. This is what Jethro did. He asked Moses what he was doing and Moses told him. The point that Jethro made did not pertain to the job that had to be done. His point was that Moses was doing it alone. We can reasonably conclude that perhaps Jethro knew of a better way or more efficient way to do what Moses was doing and was prepared to share it with him.

Has anyone questioned you about something that you are doing lately? What was your response? Did you take the person seriously or did you brush them off because you are going to do things your way? Don’t think that you are being challenged just because people ask you what you are doing. They may simply be curious about something that they saw you do or they may have a suggestion that might make your job easier. The same thing applies to you if you see someone else doing something that could be done more effectively or efficiently. Try not to challenge the person. Rather, be non-confrontational and simply work your way up to a suggestion for an alternate method of doing the same thing.

I remember when I got my first job after graduating from college. I remember designing an amplifier for IC circuits. A new employee came to me and started asking me why I was doing this and why I was doing that. He asked me if I knew about this and that. At first, I thought to myself “who is this guy acting like he knows everything.” However, I listened to him only to find out that he was an experimental physicist and was very familiar with integrated circuits. We became good friends on the job and I began to ask him questions about everything that I could think of pertaining to the physical world. I didn’t let my ego stand in the way of obtaining practical and sound technical information and advice. I practice that process to this day especially involving biblical topics. It is very dangerous to think that you have obtained all truth about a particular topic and questions from others are a challenge to your authority or intellect. They might have a valid point of view that may make things clearer to you. The point is that we should always listen to people when they ask us about our activities. Don’t feel challenged or threatened just because someone wants to make a suggestion or doesn’t understand why you are “doing it that way.”

Another application can be found in the belief that a job can only be done right if you do it. That is very wrong. The power of getting a job done effectively and efficiently and even your way is to realize that you can’t do it alone. This means that you will need the help of others. The sooner you realize this then the sooner you can experience great success or at the very least the closer you will come to completing your goal.

Exodus 18:17-18 (NKJV) So Moses’ father-in-law said to him, “The thing that you do is not good. Both you and these people who are with you will surely wear yourselves out. For this thing is too much for you; you are not able to perform it by yourself.

Jethro saw what was going on with Moses and he got information as to what Moses was doing. Now Jethro tells Moses what he has determined from the information gained. He told Moses that his actions were not good because he and the people with him would wear themselves out. The bottom line was that Moses was not able to do the work alone.

What do you do when someone tells you that the thing that you are doing is not good and tells you why he or she thinks so? Again, it won’t hurt you to simply listen to what the person has to say. He or she may have a valid point that may very well lead to a more efficient and effective way of doing your job or completing your project.

The same applies to you if you want to make a suggestion to someone. State your conclusion in a non-confrontational manner and explain your conclusion. Remember to respond objectively and not based on a subjective belief or tradition.

Exodus 18:19 (NKJV) Listen now to my voice; I will give you counsel, and God will be with you: Stand before God for the people, so that you may bring the difficulties to God.

This verse begins Jethro’s advice to Moses. Moses would teach the broad areas of God’s instruction, and others would deal with more mundane cases. Major matters would still be brought to Moses. Jethro listed only five qualifications for the men who would aid Moses. His list has some similarities to the qualifications for church offices in the New Testament (1 Timothy 3:1-13). Jethro suggests a system of delegation so that the workload is divided among capable individuals instead of Moses doing everything himself.

What is your response when someone gives you his or her point of view for what you are doing? Sometimes people have very valid points and can indeed help you if you listen to them. So don’t disregard the suggestions of people when they give it to you. Of course, in the end you will have to decide if you will implement their suggestion or not.

Exodus 18:23 (NKJV) If you do this thing, and God so commands you, then you will be able to endure, and all this people will also go to their place in peace.”

Jethro also recognizes the fact that Moses needed God’s approval to institute such a procedure. If he has God’s approval and he institutes Jethro’s suggestions then he would endure and the people would have peace as the disputes among them would be efficiently resolved.

It is important that you do only those things that are acceptable to God, which is according to His Way. Therefore, before we act on any suggestion, even our own plans, we should determine if such actions would violate any godly principles. We should also determine other implications of implementing a suggestion or any other plan of action. Jesus taught us to count the cost of discipleship (Luke 14:28-33). Likewise, we should count the cost of all of our plans (if appropriate).

Exodus 18:24 (NKJV) So Moses heeded the voice of his father-in-law and did all that he had said.

We see Moses’ character in this interaction. He was willing to listen to others and to improve the way he was doing things. This was also a mark of his leadership ability and his lack of self-absorbing pride. It does appear that Moses didn’t implement Jethro’s suggestions right away (see Deuteronomy 1:9-18). Jethro can therefore be thought of as a minister of God to the man of God.

There is one prominent fact that stands out to me regarding the interaction between Moses and Jethro. Jethro was not “a man of God.” Today we may similarly say that a person is not a Christian. However, Moses still took the advice of Jethro because it appears that God sent Jethro to minister to Moses. Therefore, we shouldn’t dismiss the advice or input of others just because they are of a different religion, denomination, nationality, or any other differences. God may very well be behind it all.

Recognize that we can’t do some things alone and that we, therefore, need the help of others to help us complete our task or do our jobs. We also should listen to people when they give us input about what we are doing. They may have very valid points that may indeed help us do our job better. Whatever we do should be consistent with God’s Way and we shouldn’t disregard someone’s input just because they don’t believe the way we believe or don’t belong to the same group that we belong, even Christianity.